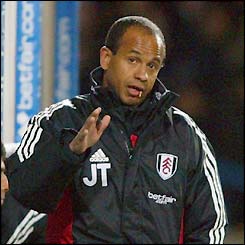 Former Fulham manager Jean Tigana is set to return to football next week as the new coach of Saudi Arabian side Al Hilal.

Tigana is expected in Saudi Arabia on Tuesday to begin contract negotiations with the club. Al Hilal sacked their previous coach,  Romanian Cosmin Olaroiu, after an incident following their victory in the Saudi Cup final. Olaroiu was embroiled in a row with security staff after he was not allowed to collect his medal with his players and refused to accept it afterwards, throwing it to the ground along with a club shirt, featuring the effigy of the crown prince to the ground. According to the Saudi federation, this was disrespectful to the Saudi royal family and the Romanian was sacked.

If the talks go well, Jean Tigana will have the job of leading Al-Hilal for the remainder of the fixtures in the Asian Champions League and the local championship.

There are just three matches left of the Saudi league season. Al-Hilal are currently in second place, two points behind Al-Ittihad.

Tigana has been out of football since he left Besiktas in 2007. He won two Turkish Cups with Besiktas but left after agreeing a contract termination with the club’s board.

Tigana’s time at Fulham ended acromoniously after Mohamed Al-Fayed accused the French coach of financial misconduct in the signing of Steve Marlet. A later court case was won by Tigana, who was awarded £2m in damages. Tigana will be fondly remembered by the majority of the Craven Cottage faithful, however, after guiding Fulham to the 2000-2001 First Division title in his first season with the club playing some beautiful football.

Fulham reached the semi-finals of the FA Cup the following season, losing to Chelsea at Villa Park, and qualified for European competition for the first team in their history after winning the Intertoto Cup. A Junichi Inamoto hat-trick took Fulham past Bologna in a memorable final. The Whites were eventually knocked out in the third round by Hertha Berlin.

Tigana left the club early towards the end of that season, with Chris Coleman stepping in to steer Fulham to safety. Tigana took charge of 154 games with Fulham, winning 69, losing 43 and drawing 42.