Ahead of our game with Spurs on Boxing Day, I thought it would be fun to trawl back through the archives and look at how Fulham have performed after Christmas over the last ten years. The pretty pictures are just for your enjoyment or to fill you in on some names you might not recognise or just not remember! LAST YEAR: A truly woeful performance saw us thrashed 5-1 at Tottenham. Ray Lewington (right) was in temporary charge that day but this defeat forced the board to action swiftly and bring in Roy Hodgson, who eventually mastermineded our survival. Two goals each from Robbie Keane and Tom Huddlestone were sandwiched between a scrappy one from Clint Dempsey before Moritz Volz was sent off for two bookable offences. Jermaine Defoe rounded off a thoroughly miserable day.

THREE YEARS AGO: We came so close to completing a remarkable comeback at Chelsea. Our fierce rivals went 2-0 up inside 25 minutes at Stamford Bridge with William Gallas punishing some slack marking at a corner and a deflected shot from Frank Lampard. Brian McBride (left) took a frightful bang to the head but came back to slide bravely in and punish a Petr Cech error from a free-kick and Fulham were level midway through the second half when Heidar Helguson dispatched a penalty after Joe Cole had hauled down McBride, a professional foul for which he was lucky not to be dismissed. Chelsea then had a goal disallowed and Mark Crossley went off injured before Hernan Crespo broke Fulham hearts with a quarter of an hour left to play.

FIVE YEARS AGO: Louis Saha (right) scored twice as Southampton were swept aside at Loftus Road. Saha, publicly courted by Manchester United, fired home the opener after 19 minutes and sealed the victory with a second-half penalty after Chris Marsden had fouled Luis Boa Morte. Saha left for Manchester United in an acrimonious £12.8m deal a month later – the club claimed it paid for a return to the Cottage – and Fulham finished the season in ninth.

SIX YEARS AGO: This match was played against the backdrop of an unseasonal announcement that Fulham would not be returning to Craven Cottage. Facundo Sava (left) put Fulham ahead at Upton Park but bottom club West Ham salvaged a draw through a Trevor Sinclair penalty, despite having Thomas Repka sent off late on. 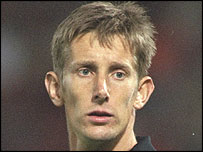 SEVEN YEARS AGO: Our first Boxing Day Premiership game was a dour draw against Charlton at the Cottage. On a chilly winter afternoon, misfiring forwards meant the scoreboard stayed blink. Jason Euell and Louis Saha missed glorious chances at either end, whilst Edwin van der Sar (right) was lucky not to gift the visitors a winner in the second half.

EIGHT YEARS AGO: Barry Hayles (below left) scored a Boxing Day hat-trick as Watford were put to the sword in glorious sunshine at the Cottage. The Hornets had fallen from their lofty perch, having been a point ahead of Fulham in November, but a strong pre-Christmas run for the Whites had firmly established them as the promotion favourites. That did nothing to dispel that tag as Louis Saha tucked home a penalty to get the ball rolling and Hayles soon scrambled home a second. After Barry had completed his hat-trick, Andrejs Stolcers hinted at more quality than we really ever saw from him with his first goal for the club.

NINE YEARS AGO: If there was a ever a game that typified Paul Bracewell’s forgettable reign at the club it was this one. Billed as an exciting meeting between two promotion contenders, the game fizzled out into a disappointing draw with little goalmouth action to enliven the cold supporters. Fulham, who came into the game on the back of a four match unbeaten run, eventually sacked Bracewell (right) once the play-offs were out of reach and finished the season with a temporary management team of Karl-Heinz Riedle and Roy Evans. TEN YEARS AGO: Goals from Neil Smith (left, against Manchester United in the FA Cup) and Barry Hayles saw us beat Colchester on Craven Cottage on our way to the Division Two title. Smith, a wholehearted competitor signed from Wycombe by Micky Adams in 1998, put us on our way midway through the first half before a penalty from substitute Hayles confirmed the victory.