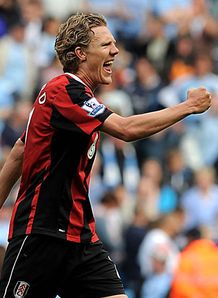 You couldn’t really argue with the result today. You might argue with the way Fulham finished the game – with no changes either in personnel or in formation to try and win in late on. A couple of guys who filed out of the Hammersmith End exit in front of me were bemoaning the fact that we didn’t ‘go for it,’ but even as we committed players forward, the dangerous Shaun Wright-Phullips broke clear and nearly fashioned a chance for Darius Vassell.

It is largely thanks to our manager’s caution and careful planning that we still sit (with a few Premier League games in progress at the moment by the way) exactly halfway up the table. As we’ve pointed out before, Hodgson has always built his sides from the back and, apart from a couple of hairy moments today, we benefited from the shoring up of our defence. Particularly in the second half, Mark Schwarzer made a couple of oustanding saves from Pablo Zabaleta, the onrushing right back who had far too much room to roam forward. Hangeland was his usual colossal self, heading countless crosses away and making one timely interception as a through ball threatened to find Benjani, and Hughes was quietly efficient (journalism like this makes me sick by the way – nowhere does Hangeland talk about his desire to play for a bigger club).

For the vast majority of the game, a surprisingly conservative City stifled our creative instincts. The quiet Ireland, shifted around to compensate for the absence of the injured Robinho stopped John Pantsil getting forward as he usually does, and the gaps in behind Simon Davies – who was largely anonymous – meant Konchesky couldn’t afford to join in too many attacks in open play. Hamann and Kompany, City’s two holding midfielders, tried to shackle Bullard and Murphy, who was often engaged in nulifying the threat of Wright-Phillips, and for the most part succeeded.

City started the brighter and scored a goal almost out of nothing after six minutes. Zabaleta beat two players from a throw in and, running out of room by the touchline, whipped in a delicious cross that dropped perfectly between Pantsil and Hangeland for Benjani to head into the corner. They were in control for much of the next 20 minutes and only the injustice of Fulham being denied a penalty for a blatant handball by Richard Dunne (no surprise that Rob Styles didn’t do us any favours) seemed to wake us from our slumber.

Bullard levelled the scores with a powerful finish from a wonderfully worked move that showed that our patient and pretty build up can create chances. Bullard, apparently in front of the watching Fabio Capello although I couldn’t see him from my vantage point in the Hammersmith End, started the move in our half and ran fully 40 or 50 yards to latch onto a lovely flick from Bobby Zamora. The much-maligned centre forward, who might have scored had he been a bit braver at a late corner, did brilliantly to shield the ball from his marker and then a clever backheel released Bullard who lashed a shot from a tight angle into the far corner.

The half time whistle came at precisely the wrong time for us as we were just beginning to get on top. Johnson was a constant threat up front and Clint Dempsey found himself in advanced positions. The American perhaps should have converted one of his chances – he snatched at a shot with his left foot from 20 yards after being teed up by Johnson and then headed high over the bar having got up well to meet a cross from Bullard.

The second half ebbed and flowed, City had plenty of the ball and a couple of efforts from Wright-Phillips and Benjani, who worked his socks off to great effect as their loan striker, crept wide. Our best chance fell to Zamora after a Bullard corner had caused confusion but he decided to try an awkward volley rather than a header and Hart smothered the danger. Bullard took a more direct route to goal, his fierce free-kick was acrobatically turned over by Hart whilst when he tried a more cultured curler it went straight down the goalkeeper’s throat.

It’s difficult not to be pleased with the start the boys have made. We’ve had a few blips (losing to Hull doesn’t look as bad as it once did, but losing to West Brom now looks atrocious), but the positives far outweigh the negatives so far. There’s plenty of reason to head into the tricky Christmas and New Year period with real hope of a mid-table finish.