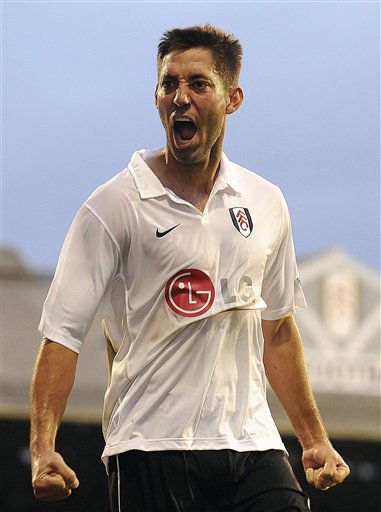 I had some Australian tourists sitting in front of me right at the front of the Hammersmith End this afternoon. Just after Clint Dempsey had tucked away our third effortlessly right in front of us, I leaned over to the gentleman who had asked the most questions and told him that they’d have to come back every week. In truth, our victory had less to do with fortune than a commanding performance and the fact that Middlesbrough, in the words of one disgruntled lady who was making her way back to the coach on the Fulham Palace Road, ‘didn’t turn up’.

This game took a while to come to life and eyebrows were raised by Roy Hodgson’s team selection. Despite Bobby Zamora passing his fitness test on Friday, the striker was only given a place on the bench and Zoltan Gera kept his place in midfield. That meant that Dempsey played in the floating role behind Andy Johnson for the second week in succession, although that experiment was abandoned once Gera limped off on the half hour. It was no exaggeration that Zamora’s introduction changed the course of the game. He provided aerial threat and worked his socks off, giving Boro once more thing to sweat about at the back.

Indeed, Zamora played a crucial part in the opening goal, which arrived four minutes before half time. John Pantsil, as eager to get forward as ever, crossed from the right and the ball reached Zamora, whose low shot on the turn was well saved by Turnbull but Bullard – who seemed to have put all that transfer speculation behind him – gleefully swept home  the rebound. After that, Boro never really had a sniff of getting back into the game.

Prior to that, the game was fairly even stephen. Johnson was bright up front for Fulham, buzzing around on the shoulder of the last defender. He brought the best out of Turnbull with a turn and fierce shot that the goalkeeper turned wide and, aside from his poor kicking, the young custodian produced a fine display. The visitors had chances mainly on the break. After Pantsil had headed wide from a Fulham corner, Sanli Tuncay sent an even more presentable chance wide when we afforded him the freedom of the penalty area at a Boro corner. Schwarzer had to be alert to come off his line and thwart young Adam Johnson, who twice made Paul Konchesky look silly in the early stages.

The penalty decision which essentially sealed the result seemed – at first viewing – to be very harsh, but it does of course redress the balance after we had two clear cut penalty appeals waved at Stoke and at home to Manchester City. Full back Tony McMahon was struggling to deal with the physical presence of Zamora and drove his attempted clearance onto his arm. Referee Keith Stroud initially waved around Fulham’s appeals but awarded the penalty after his assistant on the Stevenage Road side flagged for the offence. Danny Murphy made no mistake with the spot kick, although Turnbull guessed the right way.

It was the perfect start to the second half for the Whites, who had seemed to sit back on their lead and had already – in the words of Hodgson – ‘missed three gilt-edged chances’. The third goal was a thing of real beauty as Dempsey finished a fine team move. Bullard, Davies and Murphy were all involved with the captain playing in Demspey down the right who drove home emphatically from an acute angle.

Downing drove a powerful shot from distance just wide, but the game was well and truly won by then. There was time for two impressive cameos from debutant Dickson Etuhu and Leon Andreasen, who finished a surging run to the byline and standing up a lovely cross for Davies, whose far post header was blocked away.

Five days before Christmas – and with two tough games to come at Spurs and at home to Chelsea – this was a timely victory. The manner of our win, as well, with all three goals coming from midfield, will have done something to dispell the idea that we are too conservative in terms of tactics. Sitting 8th at Christmas makes it a job well done for Roy Hodgson.