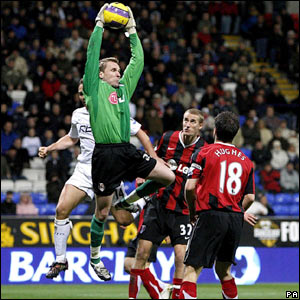 I remember when we signed Antti Niemi. I was delighted. Chiefly because we’d been waiting a long time for a goalkeeper to replace Edwin van der Sar, who had gone to Manchester United in the summer, and I wasn’t enthralled by the prospect of watching Tony Warner keep goal for the rest of the season.

Niemi had been outstanding for Southampton for many seasons – and even cracked the Loftus Road crossbar with an injury-time volley that led to an equaliser a couple of years previously. Perhaps our fans will dwell too heavily on the tail end of Antti’s career, caused undoubtedly by that horrible collision with Carlos Bocanegra against Watford when he suffered such a terrible injury. That was enough to knock the stuffing out of any player – let alone a goalkeeper. And goalkeepers have to be mad, don’t you know?

Niemi made have been dropped for our ‘Great Escape’ run-in but prior to that injury he was one of the few reasons to feel comfortable about Fulham’s defence. He could pull off sensational saves – and quite frequently did. He performed heroics to keep Derby (yes, Derby) at bay in an otherwise dire 0-0 draw at the Cottage last season and, in a revealing interview with the offal (which is actually worth reading), he picks out a game against Portsmouth as one of his favourites, when once again he was simply brilliant.

For the memories, we say thank you. For all the saves, we smile and remember their importance. For the strength and drive to recover from such a terrible injury and play a part in our belated revival, we salute you. Above all, Antti Niemi, we wish you a prosperous retirement. Because he deserves nothing less.