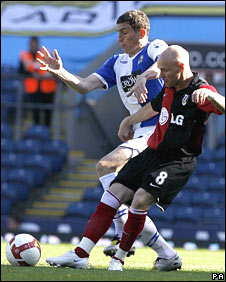 Had Johnson converted his chances it might have been different

Apologies for the distinct lack of updates for a while. I’ve been laid low by the most untimely and troublesome flu bug so haven’t been able to give you my thoughts on the latest Fulham developments, which is probably just as well really.

We went up to the north west in good heart on Friday having played some of our best football for years in that 2-1 win over Bolton the previous weekend. I was perhaps as optimistic as the two times we’ve come away from Ewood Park with a favourable result in recent years, that dramatic, late win in our Championship winning season and the 2-0 win in the 2003-2004 campaign when Louis Saha bagged a brilliant goal charging past Amoroso to reach a through ball.

It’s not neccessarily a poor reflection on the players that we didn’t come away with anything, although being level until so late in the game makes defeat so much more difficult to take. In truth, we were probably the better side for much of the contest – had Andy Johnson taken either of the chances he was afforded then the game might have followed an entirely different script. Our new multi-million pound striker can’t really have too much of the blame placed at his door, as both were brilliant saves from the much maligned Paul Robinson.

I wondered, too, as heavy challenges rained in on Jimmy Bullard, whether Hodgson should speak out about his treatment and lack of protection from referees. It is something the likes of Ferguson and Wenger – both regarded as top managers, although maybe not as likeable as our Roy – have done in recent years when their star players have been on the end of some rough treatment and there was no doubt that Bullard faded as the game went on, largely as the result of some atrocious tackling. How somebody wasn’t sent off I’ll never know.

I hate to criticise a manager – especially one who has, for the most part, got it right this season – but inevitably the spotlight must be placed on Hodgson’s substitutions. This game reminded me of that famous Euro 2004 quarter final when much was made of the fact that Luiz Felipe Scolari outwitted Sven Goran Eriksson and won the game for Portugal by virtue of making some game-changing substituions. Whilst I wouldn’t be as presumptious as to elevate Paul Ince, still an unknown quantity in terms of Premier League management, to the same level as the new Chelsea manager it is certainly true that his changes added a new dimension and dynamism to Blackburn, while Roy seemed happy to settle for a point – and believed the players on the pitch were the ones to do it for him.

We were, in truth, caught cold for the goal. Perhaps tired by an afternoon of an hard graft we were undone by a combination of the substitutes. A beach of a ball into our box left us flat-footed, largely concentrating on the threat of the newly introduced Carlos Villenueva, whilst another substitute Matt Derbyshire got on the end of Roque Santa Cruz’s knockdown to fire past a helpless Mark Schwarzer.

Another quick observation as well. How Zoltan Gera didn’t get taken off I don’t know. He was completely anonymous and didn’t look like the same player who’s been so impressive for West Brom in recent years. Perhaps it’s being shoved out on the left that’s causing the problem, but it might well be time for Hodgson to drop him.

Disappointing – and preventable, but it’s all in the past now, sadly.