A Hull of a way to start 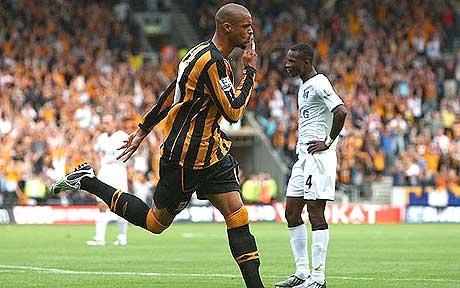 You’ve got to love the new football season. After those months of worrying about who your club’s going to sign, what system the manager will deploy and how good it is to have football back after a summer spent watching Wimbledon and the cricket, there are some things that you can rely on. Like Fulham. Teasing you like a beautiful woman, it all starts promisingly before going pear-shaped right at the end. Just like last season – a bright start, soft middle, before collapsing meekly right at the death.

I wouldn’t compare Roy Hodgson to a beautiful woman (although his new haircut makes the comparison a little easier). But, by virtue of masterminding possible the most impossible escape act known to man, he had ascended to cult status amongst the Fulham faithful. Those who questioned his rise to legendary status – quite legitimately given the dross we served up at home to Liverpool and Sunderland as well as at Derby – have been treated as though they didn’t drink the Cool Aid. Yesterday, however, he got things badly wrong.

A game against a newly promoted side is always going to be tough. Factor in the fact that it’s their first-ever Premier League fixture in their 108 year history and there are several players wanting to prove that they are worth a place at this level and you’ve got the task that was facing us at Hull. Mistake number 1 was not playing a holding midfielder. Andranik Teymourian would have fitted the bill – he might have stopped the silky skills of Geovanni, but even if he hadn’t he could thwarted that mazy dribble that led to Hull’s unexpected equaliser.

Mistake number 1 could have been playing Seol Ki-Hyeon. If you listen to any number of keyboard warriors, Seol’s not good enough. He doesn’t show enough effort or end product and moved to Fulham just so he could hang out in New Malden/pick up the big bucks as part of an inspired new Far East marketing strategy pushed by our new sponsors, LG. Those judgements are a little harsh on Hull. And on Hodgson, especially when you consider the way he headed us effortlessly into an early lead at KC. Granted he didn’t do much for the remainder of the game, but both him and Bobby Zamora were given precious little service with which to add to our tally.

Far more culpable for our defeat were the supposedly all-conquering midifield. Zoltan Gera, idenitfied as one of the bargain’s of the season by two of the Guardian’s football experts on Saturday morning, showed finishing more often found in the playground when presented with glorious opportunities to double our lead. We should have been two or three up by the time Hull hassled and harried us with a more physical game after the break. Instead we were grimly hanging on for a point.

The toast of the last season – our free-spirited central midfield partnership of Danny Murphy and Jimmy Bullard – can’t escape the brickbats either. Bullard has always had a penchant for playing the implausible pass but the pair looked far too laboured and lightweight, especially up against George Boateng, who (as Dan predicted on Friday) swept up our attacks as efficiently as a Hoover.

Our hopes of even an opening day point vanished with a bit of defending that might have been comical had it not been so sad. Paul Konchesky, unquestionably a whole-hearted performer, tried a bit of skill on the edge of his own box, lost the ball to Craig Fagan who crossed for his fellow susbtitute Caleb Folan to tuck into the empty net. That wasn’t the only time our defence was caught being so hospitable to our hosts. To be frank, it was embarassing – and, after a bright opening half an hour, thoroughly depressing.

John Pantsil (or Paintsil) has the potential to a cult hero at the club. He was impressed with our support to come other and offer some consoling claps (which, unlike so many modern footballers, he looked like he actually meant). Yes, he’s a little adventurous for a full-back and likes to get forward, but he doesn’t deserve some of the stick he’s already received. He whipped in a couple of threatening crosses, his clever decoy run led to Seol’s goal – and besides the excellent Schwarzer (who stood no chance with either goal and made a truly astounding double save early in the first half) – he was our best player. If he’s the scapegoat, it’s another case of mistaken identity for me.

There are things Hodgson should consider before the visit of Arsenal, who themselves looked shaky in beating West Brom yesterday lunchtime, on Saturday. At home, we should play with two out-and-out strikers. Hopefully, Andy Johnson will be fit to take his place in the starting line-up. Nobody did enough to keep him out of the side yesterday. Even if he isn’t, Nevland (who got an almost apologetic ten minutes) must be in line for a start. A defensive midfielder is a must. And if we’re going to respond to increasing pressure by replacing Zamora, our lone striker, with Dempsey (who nobody’s really sure where to play) it promises to be another long season.

But, whilst there are things to worry about, it’s not the end of the world. We’re traditionally slow starters – as Dan said in the preview, we’ve now lost three successive opening-day games. It’s disappointing but not the disaster some would have you believe. Plus, we played some blidning football going forward – almost reminiscent of that brilliant year under Tigana – at times yesterday. Cutting out the silly mistakes requires some old-fashioned hard graft on the training pitches. Managerial mistakes can be rectified. Let’s all keep the faith.