Mark Schwarzer credited Fulham’s video analysts after claiming he knew exactly where Jonathan Walters was going to strike his penalty during the 1-0 win over Stoke City this afternoon.

The 40 year-old goalkeeper made a sharp save from Walters’ spot-kick, diving to his left to preserve Fulham’s advantage, after referee Lee Probert had penalised Ashkan Dejagah for handball in the second half of the lunchtime kick-off. It was the Australian’s second penalty save of the season after his injury-time stop from Mikel Arteta in November ensured Fulham came away with a point from the Emirates.

We looked at video footage before the game so I was confident I knew where he was going to go. I was lucky enough to get behind it.

Schwarzer was also delighted to keep a second consecutive clean sheet after Fulham’s goalless draw at Norwich a fortnight ago, telling Sky Sports after the game:

We looked at video footage before the game so I was confident I knew where he was going to go. I was lucky enough to get behind it.

Schwarzer set to extend his contract

Mark Schwarzer has revealed that he has held initial talks with Fulham over extending his contract at Craven Cottage.

The Australian international has his sights set on representing his country at next year’s World Cup in Brazil but appreciates that his international ambitions – and the longevity of his playing career – are dependent on him remaining number one at club level.

I feel really good and don’t think the age thing is hindering my performances in any way. I’ve had some initial discussions and the intentions are there at the club to keep me. But in what capacity we’ll have to wait and see. I want to be playing each week – that’s the key for me. I love playing and don’t want to be No.2 anywhere.

The World Cup is also a huge priority and the reality is if I am not playing I don’t think it would be possible to be a part of the national team. I just want to be out there enjoying every minute – especially at this stage of my career. If that means I have to move on at the end of the season, then that’s fine also. Let’s just see how we go.

Schwarzer, who turned 40 last October, is now the second-oldest man in the Premier League, with only Tottenham’s second choice goalkeeper Brad Friedel behind him. The Fulham goalkeeper, who kept a clean sheet as Martin Jol’s side held Norwich at Carrow Road yesterday, is adamant that he hasn’t remotely considered hanging up his boots yet.

No, not yet. I will just keep my head down and keep training hard – the last few weeks have been particularly good on a personal level.

I am enjoying my football again and I’ll keep doing my job and see what happens at the end of the season. As long I’m fit and performing, then there’s every chance I can play on for at least another season after this one.

Martin Jol praised Fulham goalkeeper David Stockdale for putting his slip-ups against Swansea to the back of his mind and producing a stellar display at West Bromwich Albion as the Whites recorded only their second away win of the campaign.

Stockdale’s miscued clearance allowed Jonathan De Guzman to put the Swans out of sight at Craven Cottage on Saturday but, with Mark Schwarzer still troubled by a neck injury, the 27 year-old was far more assured at the Hawthorns and produced a pair of excellent saves from Romelu Lukaku when the New Year’s Day clash was level at 1-1.

I was very happy for him. Against Swansea (on Saturday) I think we deserved the three points more than at Albion. Because of a couple of mistakes, we didn’t look very good and that was very disappointing for him and for us because we know that he’s a fantastic goalkeeper.

Against West Brom, luck was on his side and I’m very happy for David and for the team that we could get the three points because we really needed them. We had five or six draws away from home so you can’t say that we’ve done awful but the only win we had was a long time ago, at Wigan. 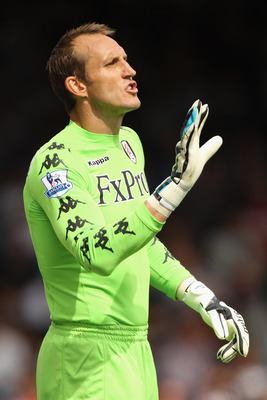 Martin Jol’s team selection at Eastlands tonight will be very interesting indeed. Will Dickson Etuhu – badly missed in the past couple of weeks – be restored to the starting line-up? In the absence of Pavel Pogrebnyak or Andy Johnson, will Clint Dempsey continue to plough a lone farrow up front? But the one question that will tell us whether Jol’s a pragmatist or has a true desire to bring down the age of his first team is who the Fulham manager picks in goal.

David Stockdale’s done pretty well since being rushed back from his loan spell at Ipswich. He preserved parity at Stamford Bridge in the derby and made a few important saves against Arsenal and Newcastle. If you were going to be critical, he should have saved Mortem Gamst Pedersen’s free-kick at Blackburn and might have stopped Formica’s crucial third. Equally, perhaps Stockdale could have done better with either of the headers that knocked us out of the FA Cup at Everton. Young goalkeepers – and, 26, Stockdale is young for a keeper – make mistakes and Stockdale is Fulham’s future. He also needs first-team football to cement his position as Fabio Capello’s number three goalkeeper, as Jol himself conceded:

If Mark plays then I will have to sit down with David. He told me at the start of the season he needed to play and I think he was right.

Mark Schwarzer’s quality isn’t in doubt either. He’s had an outstanding career in England with Bradford, Middlesbrough – and latterly with Fulham. The Australian commands his box with authority, which is the area where Stockdale might improve, and has been a key part of the club’s success over the last few years. Yet, there are signs that his powers are waning. His decision to come for a cross at Wolves was a rash one and he let a speculative shot from Leon Best beat him a little easily up at Newcastle.

The reports suggest that Schwarzer’s ready to challenge for a starting spot against Manchester City today. He’s the safer option I suppose and, having just signed a two-year contract, looks like the number one. But there is always the danger that Stockdale might become tired of being passed over. Jol made it clear he would be looking to reinvigorate an ageing squad on his arrival but so far, with the exception of introducing Kerim Frei, has been largely conservative in his choices. Sticking with Stockdale would prove he means business.