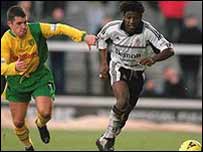 Sport.co.uk have done an interview with Rufus Brevett, one of my favourite Fulham players. He’s a smashing bloke and it’s a good read.  Follow the link.

The veteran left back was released by Oxford United having helped them reach the Conference play-offs in his first season at the Kassam Stadium. U’s boss Jim Smith revealed that the 37 year-old had told him that he was ready to call time on his playing career and pursue coaching credentials.

Brevett quickly became a cult hero at Craven Cottage after signing from Fulham from local rivals Queens Park Rangers, where he had spent seven years, in January 1998 for £375,000. He made 217 appearances in five years with the Whites, helping them win the Division Two and Division One titles and becoming a regular in Jean Tigana’s Premier League side. Brevett was also part of the squad that won the Intertoto Cup and reached the third round of the UEFA Cup and the FA Cup semi-final.