The jewel in the crown

I haven’t heard much about former Fulham centre back Philippe Christanval since he left Craven Cottage. There’s a good reason for that as it turns out. He’s retired from the game and is about to open up a jewellery store in London. Christanval had a trial at Blackburn, but after not earning a contract has decided to quit the game.

I remember when we signed Christanval on a free transfer in the middle of Chris Coleman’s reign. I was tremendously excited as I didn’t think there were too much instances of player who could list Barcelona as his former employers turning up at Fulham. Christanval initally filled a gap as the defensively minded enforcer in a midfield that was decimated by injuries as I recall before reverting back to centre half.

It was easy to see why Arsene Wenger had taken him on trial at Arsenal. He was a strong defender who had a touch of class when on the ball. Very continental. Unfortunately, we quickly discovered why Christanval’s career had never scaled the heights that it could have done: he was terribly injury-prone.

As a result, his Fulham career never really got going. He scored a memorable last-gasp equaliser that concluded a thrilling London derby at West Ham in January 2006, which was his only goal for the club. But 36 league appearances in three frustrating years says it all really. 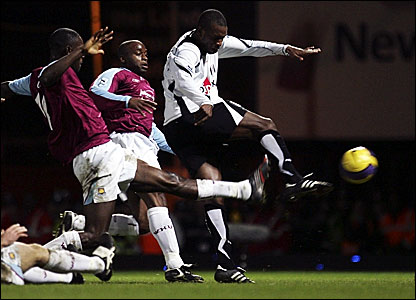 As his jewellery shop is reported to be in London, I might well pay it a visit. But considering the amount of money these modern footballers get paid, I’d be very surprised if I could afford anything.