Getting the boot – before a ball’s been kicked 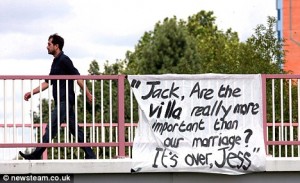 The season hasn’t even begun and one poor woman has already had enough.

The new Premier League season is barely underway but already one relationship seems to have crumbled under the strain after this banner was found hung above a busy main road in Birmingham.

The 3 ft by 3 ft banner had the unfortunate message ‘Jack, are the Villa really more important than our marriage? It’s over, Jess’ daubed over it in black paint.

The banner, situated on a busy commuter route near West Bromwich was seen by thousands of motorists who travelled along the route at rush hour seeming to refer to Jack’s alliance to Aston Villa, who play their first Premiership game on Sunday.

As if it wasn’t bad enough being a Villa fan.