A sad day in qualifying

Yesterday saw some countries play their last qualifying games for Euro 2008, for some that day is coming Wednesday. 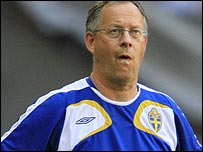 The only “good” thing about yesterday’s games is the Israeli victory over which means that is back in a position where it is up to them on Wednesday. Hopefully can qualify but still get rid of Smiling Steve. Come to think of it, hopefully can do the same. Qualify, and still sack the management. [Not that it ever will happen, but one can dream]