I am one of the younger generation of supporters unfortunate enough never to have seen Johnny Haynes play. A family friend, who is sadly no longer with us, used to make the journey down to Craven Cottage solely to see Haynes such was his quality, even as a teenager. When, as a schoolboy, I was lucky enough to be given the opportunity to interview Pele in a promotional event for Children In Need, the Brazilian legend found out I was a Fulham fan. He spent half an hour before filming excitedly informing us about Haynes as player (‘he was the finest passer of a football there’s ever been’) and a man before giving me a hug for good measure. That’s how I knew Fulham’s finest-ever player was special without having the privilege of watching him in the flesh myself.

Lifelong Fulham fan and author James Gardner wrote a new biography of the man whose statue now stands proudly on Stevenage Road earlier this month. There have been books devoted to Haynes’ magnificence before, most notably the excellent The Maestro, published by Ashwater Press, and Gardner’s doesn’t seek to cover the ground covered in them. As he writes in his note at the beginning of his book, Gardner has a clear aim – ‘Through those who knew him well, it seeks to know the man and to show the impact of his achievements’. It is a tribute to the author’s meticulousness research and attention to detail that this biography not only succeeds, but transports you back to a time when football feels like a different game and Haynes, a quiet and assuming man, seems to have a special connection with his supporters.

Throughout its chapters, the words of Haynes’ team-mates – like Tosh Chamberlain, George Cohen, Les Barrett, Alan Mullery and Rodney Marsh – as well as his peers, such as Johnny Giles and Cliff Jones – give you a genuine insight into the character of the man and the depth of his talent. There’s a foreword by Sir Michael Parkinson, which recognises Haynes as one of his favourite footballers, and touches on how he would be ‘cajoling, and more than often than not, bollocking his team-mates into a performance they didn’t know they had in them’. These insights give a new dimension to the book offering a first-hand description of what it was like to be on the receiving end of a precise Haynes pass from Sir Bobby Charlton and, in the words of the doyen of football writers, Hugh McIlvanney, why ‘the Maestro’ was quite so special.

The reader hears in painstaking detail how that close that car crash in Blackpool came to robbing the England captain of his career and just how had he had to work to play professional football again as well as the pain of missing out on the 1966 World Cup – and just why Sir Alf Ramsay did it. There’s plenty of background on how the original ‘Brylcreem boy’ enjoyed his stardom in the Sixties whilst remaining grounded and close to the Fulham fans that paid his wages. The moment when Haynes nearly sparked a Roman riot after inspiring a famous England win in Italy uncovers his unique humour, whilst there’s an earnest discussion of how it came to be that one of the finest talents of his generation was never honoured by Buckingham Palace unlike so many other England greats.

The book contains so many gems it is well worth purchasing whether you’re a fan of Fulham, football, or neither. As a work of social history, it is immensely valuable – with insights into the sport when it retained its place as the people’s game and the heroes were humble, assuming men. Haynes, when asked if he would play a prominent role in the Back to the Cottage campaign of the early 2000s, insisted he didn’t want any special treatment and was genuinely surprised that modern Fulham fans had such affection for him. He wrote passionate letters of support from his Edinburgh, signing them simply ‘John,’ and his membership fee arrived with a handwritten message each year until his sad death.

By reading this book, I feel like I watched Haynes play his 594 senior games for Fulham and can truly appreciate how he, the first recipient of £100 a week, changed football forever. That’s the tribute I have to pay James Gardner for his remarkable work.

Johnny Haynes: Portrait of a Football Genius by James Gardner is published by Pitch Publishing and is available in hardback for £18.99.

The genius of Johnny Haynes 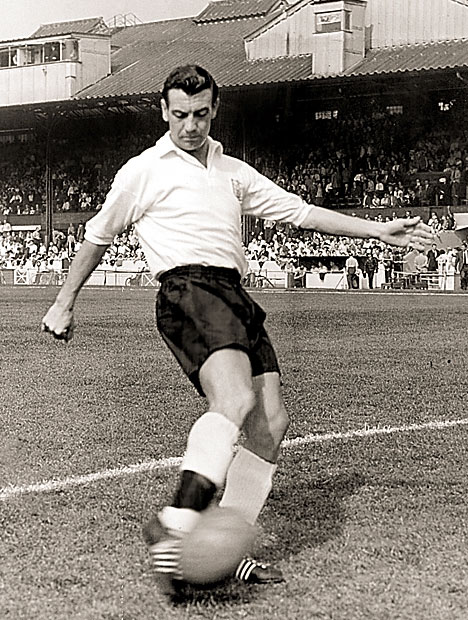 If you’re a Fulham fan, you’ll never tire of reading about the Maestro. Dominic Bliss has penned some terrific reflections on Johnny Haynes over at The Inside Left, which features some lovely recollections from his good friend and team-mate Tosh Chamberlain as well as the thoughts of a man who had the difficult job of marking Haynes, Tommy Docherty. It’s well worth a look.

There’s a cracking interview in the Sentinel with the former Chelsea, Stoke and Arsenal midfielder Alan Hudson about his surprising love for Fulham.

Hudson, whose boyhood hero was Johnny Haynes, was turned down by Fulham as a schoolboy and will be one of the guests of honour as the Whites take on Stoke at the Britannia Stadium next weekend. His support for the Craven Cottage side came from his family first of all.

My dad Bill was Fulham born and a Fulham fan and was a good player himself who could have played. He met my mum and moved to Chelsea, but he was always a Fulham fan from a family of Fulham supporters.

I wanted to play for Fulham and be the next Johnny Haynes. I saw him play as a kid and later became friends before his untimely death.

I remember later in life being at a dinner when Johnny was on the top table with Jimmy Greaves and others like Terry Venables and Bobby Robson. Like Jimmy Greaves, if you told Johnny what a great player he was he would get embarrassed. Anyway, that night I shook his hand and asked him for his autograph.

He said ‘you’re joking aren’t you?’ I then said I always wanted his number 10 shirt at Fulham, but I ended up getting Jimmy’s number eight at Chelsea.

Hudson, who won two England caps in 1975, clearly reveres Haynes, who spent his entire career at the Cottage.

He’s one of the most under-rated players and he could have probably gone on to any club in the world, including the great Real Madrid at that time. But he would never leave Fulham because he loved Craven Cottage and he was idolised there.

I remember Rodney Marsh once telling me the story of when he was at Fulham and went out on to the pitch for a fitness test on the Thursday before a game on the Saturday. He said he threw the ball and went to run after it when the groundsman came over and said he couldn’t play on there before a game. He said ‘there’s only one man allowed on there and that’s Johnny Haynes’.

Fulham’s fortunes might have been a bit different in the late sixties and early seventies had they not opted against signing a young Hudson.

My dad took me to Fulham at 12, but they said I was too small. My dad hated doing it, but he then took me to Chelsea and they took me on. I remember being on a train a few years later when Bobby Robson, who was then Fulham manager, was also on it.

My dad told him to go and watch a kid he had seen, but Robson never did. Then the next year, Chelsea went to watch a game at Cambridge to watch one kid, but came back with another. It was Ian Hutchison, the same kid my dad had been on about.

So just think, if things had been different, Fulham could have had me, Hutch, Marsh, Johnny Haynes and Malcolm MacDonald. And then later on George Best and Bobby Moore.

Fulham’s finest ever player would have been 75 today.

Sadly, I’m too young to have even seen Johnny Hayes play. But I’m assured by those lucky enough to have watched him – and the footage bears it out – that Haynes was a truly special player. An England captain with a quite brilliant range of passing and blessed with remarkable vision, Haynes was also a one-club man throughout his career, which often meant he was playing a couple of levels below where he should have been. In many ways, he was the antitode to the modern footballer, who seems to swap clubs almost every year.

GBLB from TIFF found this video of Haynes the other day. Though it doesn’t catch the great man in his prime, the magic is still very much there:

Here’s Haynes at his best for his country as England thrash Scotland at Wembley in 1961.

If the footage has made you nostalgic, I’d recommend the brilliant book on the The Maestro produced by Ashwater Press.

More on the Maestro

A nice write up on Fulham’s finest ever player here, but how do Goal justify making him only England’s 32nd best player? Surely, he ranks higher than that.