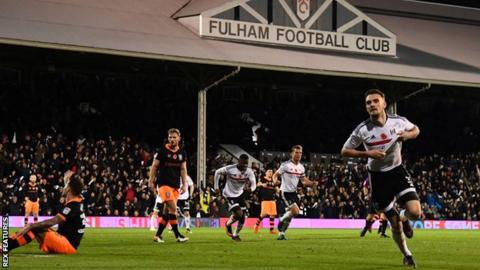 Scott Malone was delighted to pop up with the inury-time equaliser that rescued a draw for Fulham against Sheffield Wednesday yesterday – and felt the point can help the Whites head into a crucial run of fixtures in good heart.

The former Millwall and Cardiff defender scored his second goal of the season in the first minute of added time to cancel out Fernando Forestieri’s first half strike for the Owls and hand the home side a reward for their domination of possession throughout the second period. Malone told FulhamTV afterwards:

Personally, I was delighted to get the equaliser. It gives us a little bit of a boost going into the away game at Brighton next week. There are mixed emotions in there [the dressing room] – not too excited, not too downbeat – it’s a good point and we move on.

It can be very hard to break them down – they scored and then put men behind the ball. I think that’s why we are getting results away from home rather than at home because teams come here and sit in their shape and they are frustrating us. I think we’re just got to find a little bit sharper passing, a little bit more fire in us to break teams down a little bit earlier and if we can get that goal a little bit earlier, we can go and win the game.

He also revealed that head coach Slavisa Jokanovic had used video footage to encourage Malone to keep getting into advanced positions to support Fulham’s attacks – something which paid dividends right at the death.

With a few minutes to go, you could tell they were struggling a little bit. I saw a video before the game where I was popping up at the back post during the Brentford game and the gaffer said he likes that, he wants to keep attacks going and I thought, ‘I’ll just get in the box and see what happens’. It took a nick on the way through, hit me and it was just head down and lash it really. It’s gone in and got us a valuable point.