All you need is Duff 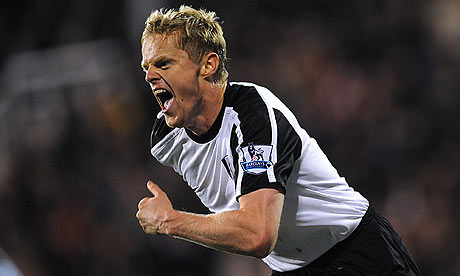 Damien Duff announced his retirement from professional football this afternoon at the age of 36, conceding that ‘my body has won the battle‘. But, my, what a fierce battle he waged. In full flight, Duff was a mesmerising sight – powering past full-backs at will – but, unlike so many wingers in the modern era, he showed the intelligence and adaptability to be remarkably effective once the blistering pace became less devastating. Those who measure success in medals will point to those back-to-back league titles with Chelsea and the League Cup win at his first club, Blackburn Rovers, but Duff’s energy, endeavour and spirit will always mean he’s fondly remembered at Fulham.

Like so many Roy Hodgson signings, news of Duff’s arrival in south west London – confirmed a couple of months into the 2009 season following Newcastle’s relegation from the top flight – was greeted with concern that he might have been past his prime. It took just twenty seconds of his Fulham debut to dispel any doubts. Duff, delighted to be reunited with Hodgson who had introduced him into the Rovers first team, was already bouncing up and down eagerly on the touchline before he replaced Zoltan Gera and wasted little time in introducing himself to the Craven Cottage faithful. He sped past his man and found Erik Nevland with a delicious cross, before Bobby Zamora buried a vital third goal.

The Irishman, a funny and warm figure who nonetheless shunned the limelight, quickly established himself as an indispensable member of Hodgson’s side. His first goal for Fulham was a winner against an Everton side who had threatened to run riot in the first half at Craven Cottage and his second sparked a spirited comeback from 2-0 down at Manchester City. Duff’s desire to prove himself again at the highest level was a driving factor in his effervescent displays – summoning up bundles of energy and working over opposing full-backs with intelligent runs and movement rather than the swift turn of foot that had characterised those days further down the Fulham Road.

Hodgson’s management of his tricky winger was inspired. He swapped him from flank to flank, often several times in a game, dovetailing with Simon Davies, and also made of the most of Duff’s almost insatiable appetite for hard work. Duff’s decisiveness around the opposite box was well known, but a key factor in Fulham’s unexpected European odyssey was his willingness to protect his full-backs, often the unheralded John Pantsil or Stephen Kelly. Whenever the Whites were in a tight spot, you could count on Duff’s uncanny ability to buy a cheap free-kick to relieve the pressure too.

Some of his performances were sensational. Duff was virtually unplayable when the Whites swept aside a depleted Manchester United 3-0 at the Cottage in December 2009, scoring the third goal with a delicious drive from the edge of the box – only days after Fulham had progressed from the Europa League group stages with a win in Basel. Perhaps his most crucial contribution to that most magical of runs came in the quarter-final when he thumped home an unstoppable shot from twelve yards after fine approach play from Zamora. We can only wonder what might have been in Hamburg had both men been anything approaching fully fit.

Duff’s productivity showed few signs of slowing down under Mark Hughes, despite Fulham’s slow start. A typically lung-bursting run down the left supplied the first equaliser in a pulsating draw with Manchester United in the first home game of the new campaign, but Duff really came into his own as Fulham climbed the table in the second half of the season and he came back from a few injury niggles. He scored the winner against his former club Newcastle – celebrating wildly in front of the Hammersmith End after taking an almighty hammering from the travelling fans – and went on to score five times in seven games, including a brace in a 3-2 win against Blackburn.

Under Martin Jol, Duff was one of the wider players to be gradually freed up from the defensive shackles that the Hodgson system had imposed. He scored twice in the early European qualifiers and was a regular in the side during the Dutchman’s first season at the helm. A regular source of assists, Duff found the net often in Europe but scored just three domestic goals throughout the whole campaign, the last of which came against Norwich in March. A week later, his creativity made two goals for Clint Dempsey at Bolton, during his 350th top flight appearance. He started the following season in fine form, beginning Fulham’s five-goal thrashing of Norwich and putting the Whites in front at Old Trafford from a quickly-taken free-kick. He scored the winner at Wigan in September, latching onto a fine pass from substitute Bryan Ruiz to fire home from the edge of the box.

Duff endured an injury-hit final season with Fulham, struggling to feature as the Whites’ thirteen year stay in the top flight came to an end. It was cruel that his final appearance in a white shirt came in that utterly forgettable FA Cup exit at the hands of Sheffield United, but Duff’s longevity as a Fulham player belied the understated manner of his departure; released quietly on a free transfer, admitting to an Irish newspaper that he’d shed tears over Fulham’s relegation and his inability to rescue his team from their plight. The decorated Irish international, who passed the hundred cap barrier whilst with the club, made 173 appearances for the Whites, scoring 22 goals, in five memorable years down by the River Thames.

In a rare interview, Duff described how ‘I like to think that I have found my feet again here at Fulham.’ He went on to laud the club’s ‘character’ and the finest tribute you can pay a footballer of such fine pedigree is that he typified the character at the heart of Fulham’s finest ever side. Some sportsmen lead through their words, Duff did in his actions. He hassled and harried, chased lost causes, skinned full-backs for fun and finished with aplomb. He did it all with a smile on his face – and forged a special bond with the Fulham fans, who might still wonder whether he could do a job on that troublesome right flank. Thanks for the memories, Damien.