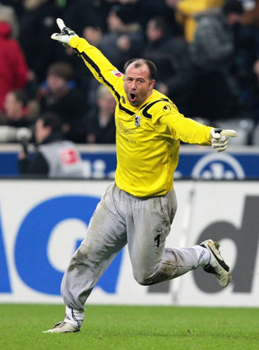 Fulham have confirmed the signing of veteran goalkeeper Gabor Kiraly from German side 1860 Munich for an undisclosed fee.

The Hungarian international, who has enjoyed in England spells with Crystal Palace and Burnley, has signed a one-year deal with Championship Fulham and will offer the experience in goal that Felix Magath has been seeking as he has alternated between Jesse Joronen and Marcus Bettinelli, who made his senior debut in Tuesday’s League Cup win at Brentford. The 38 year-old, who made 188 appearances in five years with 1860 Munich, says he discussed his potential move with former Fulham cult heroes Moritz Volz and Zoltan Gera before agreeing terms with the London club.

Kiraly’s wealth of experience, which also includes 90 caps for his country, was one of the major reasons why Magath was keen to conclude the deal. The Fulham manager said in the club’s official statement:

I’m pleased that Gabor joins us today. He is a goalkeeper with vast experience of playing at the top level in England and Germany. He will be an important addition to our squad for this current season and he will also be able to assist our two young goalkeepers with their continued development and progression in our first team.

Kiraly, who was widely recognised as one of the best goalkeepers in the German second during his time in Munich having initially signed as a number two, was delighted to return to England:

I’m very happy to be here. Fulham is a great club and I’ll always give my best.