Goodbye Rene Meulensteen – the man we barely got to know 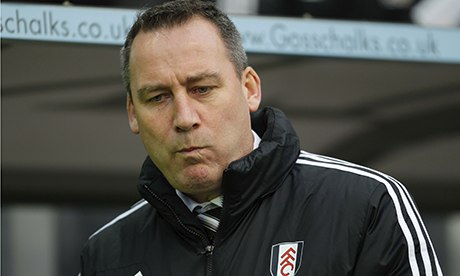 Even in the phenomenally harsh world of professional football, Rene Meulensteen’s sacking as Fulham manager seems particularly brutal. After just 75 days, the man asked to halt an alarming slide once Martin Jol had reached the point of no return was also clearing his desk, having just taken a point at Manchester United and been a matter of minutes away from a creditable draw against the country’s most in-form side. As Meulensteen’s former boss at Old Trafford, Sir Alex Ferguson, once famously remarked: ‘Football. Bloody hell.’

The suspicion even after his own whirlwind appointment was that Meulensteen might prove to be a much better coach than manager – something only enhanced by the swift addition of Alan Curbishley and Ray Wilkins to his backrom team The grim statistics suggest that his short stint in charge was remarkably similar to the start to the season which Jol presided under. Bar a spirited and frenetic hour against Tottenham, there wasn’t much of a new manager’s bounce: a battling win at Norwich was followed by the hapless humiliation at Hull and defensive disasters at home to Sunderland, who were then bottom of the table, and Southampton.

Meulensteen was open and honest in his dealings with the press – perhaps far too honest when it came to discussing his hopes of signing Ravel Morrison – and his sunny disposition hinted at a genuine belief that Fulham could pull another incredible feat of escapology. But it was difficult to decipher what his approach would be. He started with an extra central midfielder, supplementing the regular duo of Steve Sidwell and Scott Parker with the apparently ageless Giorgos Karagounis, which helped Fulham see more of the ball and begin to dictate the play. Then, the Greek veteran was unceremoniously jettisoned and the natural width offered by two genuine wingers also disappeared without explanation.

It was almost as though Meulensteen was an attacking coach at heart but the perilous nature of Fulham’s predicament paralysed his purest instincts. The situation called for dogged discipline rather than the rampaging forward that saw his side stripped of the ball far too easily against the lesser sides. The more defensive shape, with a holding midfielder and wide players tucked in to support a struggling back four, was an apparent admission that he was too gung-ho in those games against Sunderland and Southampton, which you fear might already have settled Fulham’s fate.

It is ironic then that Fulham’s best displays under Meulensteen were battling, backs-to-the-wall efforts against Manchester United and Liverpool. It was here were we saw pragmatism and tactical planning married to good effect: Meulensteen’s inside knowledge of United’s gameplan, as well as the bravery to drop the likes of Brede Hangeland and Parker, effectively stifled the champions, even if the home side should still have penetrated far more successfully with the amount of the ball they had. Against Liverpool, Fulham were far more adventurous and probably deserved the half-time lead they didn’t quite manage. Sasca Riether’s tired, late lunge at Daniel Sturridge proved very, very costly indeed.

Any assessment of Meulensteen’s brief tenure at Craven Cottage isn’t complete without considering the lamentable performance in the FA Cup replay against Sheffield United. Fulham, admittedly much changed from the eleven Meulensteen might consider his first choice, were painfully pedestrian and barely hinted at an attacking threat throughout the 120 minutes. Indeed, Clint Dempsey’s angry squaring up to Harry Maguire and company after the final whistle was about as dangerous as the home side looked all evening. That, rather than the late failure against Liverpool, might have been the night when Fulham’s panicked hierarchy decided a change had to be made.

Of course, a managerial novice was always likely to make mistakes. Meulensteen has paid for those with his job – and only future results can tell us whether that was a wise decision. But the Dutchman also restored the hunger and passion that had been missing for so long to a flagging Fulham side. He gave a first-team debut to Dan Burn, a promising centre back previously on loan at Birmingham, who has taken his opportunity eagerly and barely put a foot wrong. We’ve also seen the emergence of promising young talents in Muamer Tankovic and Moussa Dembele and the addition of Ryan Tunnicliffe and Larnell Cole – largely drawn to London by the prospect of working with Meulensteen again – hinted at an eventual reshaping of the side with the future in the mind. A progressive playmaker finally arrived in the January transfer window in the shape of Lewis Holtby, who has immediately energised a team sorely lacking creativity.

Meulensteen might not look back favourably upon his time at Craven Cottage. It ended as surprisingly as it started – and Meulensteen has returned to the north west to regroup. Fulham’s failure to mention him in the statement that spoke of his replacement was regrettable and, the real sadness is that we’re saying goodbye to an amiable man who we were only just getting to know.