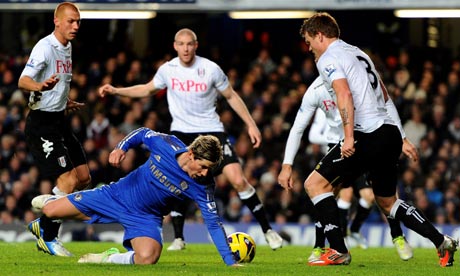 Fulham may have once again failed to win at Stamford Bridge since shortly after Margaret Thatcher took office as Prime Minister, but the days of the Whites being south west London’s patronised little brother are long since passed. Whilst Chelsea’s disenchanted supporters staged a ‘silent protest’ in their second game since the unloved Rafa Benitez replaced Roberto Di Matteo and Queen’s Park Rangers confront another relegation battle, Martin Jol’s boys are buoyant. This point stopped a six game winless streak and, roared on by a racuous away following, it was the least Fulham deserved after a disciplined and defiant display.

Few Stamford Bridge regulars will attach much weight to Benitez’s post-match bluster about the Blues being able to compete for the title. The hosts were horribly subdued for much of the evening, with Fernando Torres misfiring once again up front, and there are few signs that Chelsea can bridge a seven point gap to the leaders. The Spaniard admitted to being frustrated at his new side’s tame showing, which saw them only extend Mark Schwarzer three times, but Jol was entitled to feel disappointed especially as Fulham finished strongly, with John Arne Riise missing two terrific second-half chances to seal a special win.

The Norwegian left back should certainly have managed more than the tamest of finishes after a splendid pass from the excellent Giorgis Karagounis sent him clear on goal and his more venomous effort from the edge of box was superbly saved by Petr Cech just before the final whistle. Fulham’s diligent defending was typified by the outstanding Aaron Hughes, who hooked away a goalbound shot from Torres in a moment of quick thinking that meant the visitors barely missed Brede Hangeland, while Steve Sidwell snapped into tackles with the energy of someone determined to prove a point to his former employers.

Chelsea sorely missed Juan Mata, who was dropped in favour of Oriel Romeu, and only when the Spaniard replaced Ryan Bertrand did they seem capable of breaching the white wall that protected Schwarzer. Without Mata pulling the strengths, Oscar and Eden Hazard looked less than wonderkids and far more workmanlike: the home side only had a tame Torres shot straight at Schwarzer to show for their first half efforts. Chelsea enjoyed plenty of possession, but struggled for potency.

If Benitez asked for better in the second half it took a while for his instructions to filter through. Dimitar Berbatov, again wearing the captain’s armband in Hangeland’s absence, was peerless at the point of Fulham’s attack. The Bulgarian was wrongly ruled offside when he burst clear and Chelsea’s fruitless attempts to contain him were epitomised by a Romeu rugby tackle that smacked of frustration. Karagounis lashed a shot straight at Cech and Fulham’s fluidity saw Sascha Riether roam forward for right back before his run was cynically halted by a desperate David Luiz elbow.

A derby largely devoid of goalmouth action came to life in the closing stages. Fulham’s repelled Chelsea’s attacks with vigour, with Hughes and Sidwell throwiung themselves in front of speculative strikes from Mata and Ramires, and the returning Kerim Frei terrorised Cesar Azpilicueta but referee Anthony Taylor waved away the visitors’ voicerfous penalty appeals. The home fans greeted the final whistle with boos and plaintive pleas of ‘We want our Chelsea back’.

Benitez might have tightened things up at the back, but Chelsea have lost the adventurousness that characterised their bright start to the season. Without it, they look terribly tame. By contrast, Fulham’s point was an important one, especially as Jol couldn’t field the likes of Hangeland, Alex Kacaniklic, who watched proceedings from the amongst the away support and Bryan Ruiz. Parity was the right outcome, but the white half of south west London went home far happier.