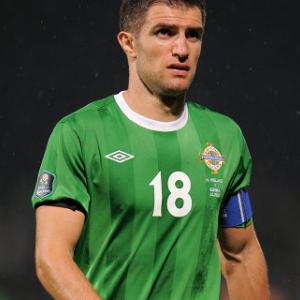 Aaron Hughes has reversed his decision to retire from international football and will now be available to play for Northern Ireland under new manager Michael O’Neill.

The Fulham centre back credited his club coach Billy McKinlay, who has recently joined O’Neill’s backroom team, with changing his mind over his international football adding that he had been giving the matter a lot of thought recently. Hughes, who has won 79 caps for his country and was captain under previous boss Nigel Worthington, was contacted by O’Neill as the new manager sought to retain some of Northern Ireland’s star performers.

In a statement published on the Irish Football Association’s website today, Hughes said:

I have thought very carefully over recent weeks about returning to play for the national team, since my decision to retire at the end of the last campaign.

After speaking with the new manager, Michael O’Neill, and also Billy McKinlay, who I’m obviously close to at Fulham, I feel I would like to once again return, and try to help us qualify for the next World Cup. I  am proud to represent my country and it is my aim to contribute as much as I possibly can for the upcoming matches.

Hughes is likely to make his international return in O’Neill’s first game in charge, which is a friendly against Norway in Belfast on February 29.