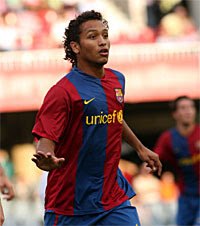 Reports from Spain suggest that Fulham have tabled an €8m bid for Barcelona forward Jeffren.

Spanish newspaper Sport published the claim today and said that Jeffren, who has already turned down the chance to join Udinese, will meet with Barcelona on Monday to discuss his future. The 23-year-old starred during this summer’s European under-21 championships and made Spain’s first goal in their victory over Switzerland in the final.

Liverpool and Valencia are also reportedly interested in the Barcelona youngster.