How to beat United

Are you reading Roy?

Doubtless the Fulham manager’s got his own plans – and they probably won’t involve coming to Old Trafford and throwing everybody forward. For all the talk of a shaky start to the campaign, Ferguson’s side have lost just one league game at Old Trafford this season – to Aston Villa. It was one of those games where James Milner convinced me he should be in Capello’s starting eleven for the World Cup.

Strikingly Damien Duff had a similar impact at the Craven Cottage, albeit against a severely weakened United side playing with a strange back three. Notice just how industrious Duffer was, working hard deep in his own half. That kind of commitment will be vital if we’re to get anything out of today’s game.

It will be interesting what sort of line-up Ferguson goes with today, especially as this game probably means more to United than it does to Hodgson. If the conventional wisdom is correct, Fulham might have some joy against Rafael. The young full-back’s brilliant going forward but can be caught in his own defensive third. You made need Dempsey rather than Davies running at him, but the point remains the same. Whipping in some crosses would be useful: Brian McBride scored a soaring header at Old Trafford one year after fine play down the wing from Liam Rosenior. 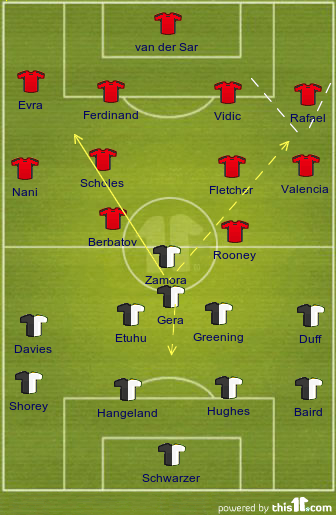 There’s also the small matter of stopping United from playing, which is easier said than done. Sitting too deep against them just won’t work. If Berbatov plays we’ll do well to keep him as quiet as we did at the Cottage the other year:

Sadly, I doubt a rampaging Rooney will be as ineffectual or as fiery, especially since he’s matured under Capello’s management, as that day either.