Are you watching Fabio? 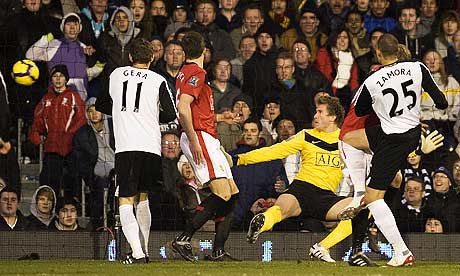 There was mild amusement amongst some of the press pack when Roy Hodgson suggested Bobby Zamora might be one of those in contention to make a late run into the England World Cup squad a few weeks ago. Nobody’s sniggering now, are they? Zamora’s run of five goals in four games – each of them crucial to Fulham’s cause – have made people sit up and take notice of a guy previously derided for his lack of composure in front of goal and another awesome performance against Manchester United probably catapolted onto Fabio Capello’s radar.

Zamora’s probably very unlucky that his run of form coincides with the only period in the immediate domestic calendar where there isn’t an international friendly around the corner. Injuries are dogging Capello’s main ‘target men’ and the Italian seems sold on the idea of using a tall front man as a foil to the mercurial Wayne Rooney. Carlton Cole looks set to be on the treatment table for a while while Emile Heskey’s club form for Aston Villa is virtually non-existent. Peter Crouch won’t have done his cause any harm by finding the net at Blackburn at the weekend but there’s a nagging suspicion that Capello doesn’t fancy the Spurs forward.

He could do worse that check out Zamora, who has been inconviencing defenders long before this recent goal glut. He absolutely terrorised Roma at the Cottage and it was Hodgson’s decision to replace him after an hour that turned the game that night. A rampaging performance followed against Hull and the confidence returned. Just to show that he could do it under pressure, Zamora settled Fulham’s nerves in the make-or-break Europa League clash in Basel with a brilliant brace just before half time.

Zamora’s always insisted that there’s more to a forward’s role than just a plain old goal tally. It was a point he made again in an interview on Saturday:

If you ask Joe Bloggs down the street how many assists I have had this season they wouldn’t be able to tell you. Or how many team-mates I have set up for a shot at goal. Or pass completion. They just know goals, full stop.

Thanks to the frankly awesome OptaJoe, we’re going to redress that balance. Zamora’s thumping finish on Saturday took his goals per games ratio to 45% season, a strike rate only bettered by the three Englishmen ahead of him in the international stakes: Bent, Rooney and Defoe. Both his percentage of chances converted (22%) and his shooting accuracy (48%) when compared to his Premier League counterparts. His passing accuracy is a respectable 63% and the most telling stats are the last. He’s made three league goals for Fulham this year – the last with an effortless flick of his outstretched boot to send the ball gracefully into Damien Duff’s path for the third goal against United – and created 35 chances. The figures suggest he’d be a more effective front man than Heskey.

As always, though, the man in possession in the hardest to dislodge. Hodgson, angry that his post-Sunderland comments could have been interpreted as advice from a club manager to Capello about who he should pick (and Roy knows all about the frustrations of international management), said on Saturday that Bobby still had a lot to do to make a compelling case for inclusion. He’s right. Zamora will now be even more tightly marked and faces two tough tests against former club Tottenham and leaders Chelsea over the festive period.

There is, of course, one fact Fabio might not be aware of. England only win the World Cup with a Fulham player in the team. That’s enough of a reason to get him down to the Cottage on a more frequent basis.