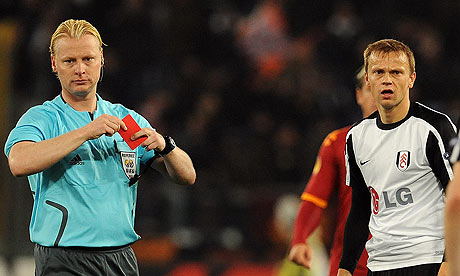 Two bemusing red cards turned a fine Fulham performance into a gallant defeat in Rome as the Whites’ European hopes receeded with a dispirting defeat.

Roy Hodgson’s side had played magnificently in the first half, quietening a meagre crowd and showing much more adventure that might have been expected as the manager opted for Diomansy Kamara and Clint Dempsey up front. Kamara’s pace and Dempsey’s clever runs worried the Romans from the off and Fulham might have taken the lead before Marco Andreolli clumsily tripped Kamara in the box. The Senegalese striker, who had earlier signalled to the bench that he had aggrivated a knee probelm that curtailed his involvement against Liverpool on Saturday, calmly tucked away the penalty himself.

The visitors, comfortable on the ball and assured in defence, might have had more before half-time too. Dempsey spurned two good chances and Kamara headed wide unchallenged at the far post from a Bjorn Helge-Riise cross. There wasn’t terribly much to worry Fulham at the other end as Claudio Ranieri’s side looked strangely subdued. Centre half Philippe Mexes headed agonisingly wide and Stefano Okaka Chuka nodded well past Mark Schwarzer’s far post but the most alarming moment came when Roma appealed voicerfously for a penalty at the end of the first half when Daniele de Rossi’s shot hit John Pantsil on the arm.

Fulham’s comfort lasted barely a couple of minutes into the second half. Erik Nevland, who had replaced Kamara, dived into a needless challenge ten yards into the Roma half and barely caught de Rossi. The Roma skipper, the man who shamefully elbowed Brian McBride at the last World Cup let’s not forget, collapsed in a heap and before you knew it the Dutch referee Kevin Blom had pulled out a red card. Nevland was mystified and, whilst it was an ill-advised tackle from behind, it looked far more worthy of a caution.

From there, the pattern of the game changed. For the second time in a matter of two weeks, Fulham had to try and hold out against the Italian giants with ten men. The difference was that the Whites had substantially longer to cling to their advantage in Rome than at Craven Cottage when Stephen Kelly was dismissed. The momentum of the game was with the home side and it seemed only a matter of time before they scored.

Marco Cassetti should have equalised with a header at the far post as Pantsil stood off the dangerous Stefano Guberti and then the left winger had a long-range effort tipped over the bar by Schwarzer. John Arne Riise was growing in influence, as he had at the Cottage in the reverse fixture, and signalled his intentions with a deflected free-kick. From the ensuing corner, a left-footed blockbuster from the Liverpool full-back had the desired effect – albeit only after two deflections, from Zoltan Gera and the unfortunate Bjorn-Helge Riise, had befuddled Mark Schwarzer.

Hodgson had been waiting to bring on Bobby Zamora, who had a couple of promising touches, before Roma’s comeback was complete. Rodrigo Taddei tricked his way into enough space to send over a dangerous cross which Okaka headed goalwards. Despite getting a hand to it, a crestfallen Schwarzer couldn’t keep it out.

Fulham threw Brede Hangeland into attack in the closing stages and nearly grabbed an equalised. The giant Norwegian defender flicked a ball cleverly towards Zamora, who felt he was pulled to the ground by a backpeddling Andreolli. Nothing was given, although in the ensuing scramble, Hangeland nearly propelled the ball goalwards again.

Paul Konchesky’s sending off for a mistimed challenge on Taddei merely confirmed that it wasn’t going to be Fulham’s night and the television cameras revealed Hodgson’s angry. Normally a reserved and sensible man, the Fulham manager directed at fiery tirade towards the officials as a disconsolate Konchesky trudged off. Julio Baptista might have made it even worse for Fulham but dragged his late shot wide.

Those red card decisions might have an even greater impact on Fulham’s European advantage that merely denying them a chance of three points. Konchesky and Nevland will now be unavailable for what becomes a massive game against CSKA Sofia at the Cottage on December 3. The Cottagers, unbeaten until tonight, have now slipped into third place in the group, behind Roma and Basel, who look to have all but booked their passage into the knockout stages with a win over Sofia.